Our Esteemed HistoryThe Foundation of Which Enables us to Wholly Embrace the Possibilities of the Future.

The Making of a Masterpiece

In the late 1960s, Arthur Landers left his job as a manager at a Boston-based electronics firm to avoid uprooting his family to the company’s new location in California. While exploring new work opportunities, Arthur consulted with a small packaging company where his wife, Nancy, was employed. After successfully helping troubleshoot equipment problems they were experiencing, the company invested in his innovative solutions, and Arthur was hired as a manager at LaminatedFILMS & Packaging. 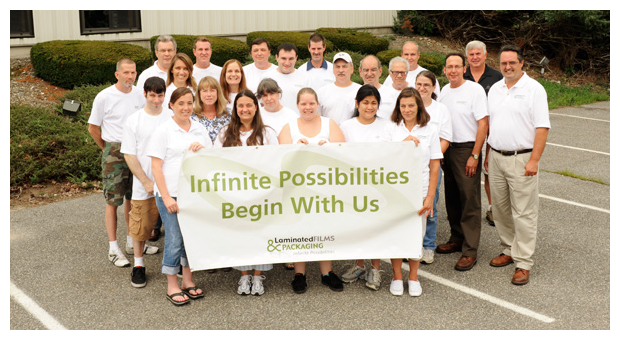 Around this time, DuPont, a preeminent chemical company, had been working with a limited number of partner companies to introduce medical-grade Tyvek® to device manufacturers. DuPont contracted Arthur to complete a machine that could seal a chevron peel pouch. His solution succeeded, and soon after, the company that had previously been tasked with coating the Tyvek® acquired LaminatedFILMS. Arthur went on to develop the first machine to manufacture Tyvek® pouches.

This business, located in Salem, Massachusetts, grew so rapidly that the parent company of LaminatedFILMS moved the business to its main facility, out of state. Faced once again with the undesirable circumstance of relocation, Arthur boldly decided to buy all but the medical packaging line of the company’s assets and focus on industrial and military packaging.

In the mid-1970s, after completing enlistment in the U.S. Coast Guard, Arthur’s son, Jim Landers, joined the company. The electronics industry was evolving the protection offered by device packaging to accomodate electronic components, which were more sensitive to environmental elements, such as humidity and electrostatic charge.

LaminatedFILMS’ involvement in the development of new ESD (electrostatic discharge) materials would later lead to the company’s success in the Aerospace industry. Additionally, the company resumed producing peel pouches when Arthur’s two-year non-compete in the medical packaging industry concluded.

The company’s facility in Portsmouth, New Hampshire, was completed in 1984. With Jim Landers now running the company, Arthur moved to Melbourne, Florida, to retire. Growing restless within a month of relocating, Arthur decided retirement did not yet suit him, and instead launched a new clean-room facility in Melbourne where it would be possible to manufacture packaging systems for NASA sub-contractors. The close location to the Kennedy Space Center helped the company become a respected supplier to the space program.

Now, four decades later, LaminatedFILMS is recognized industry-wide for delivering innovative packaging solutions on-time, within specifications, and with competitive pricing. We are proud to say that Arthur’s commitment to product quality is evident with every flexible packaging solution we deliver and his relentlessly innovative spirit lives on in the work we do each day to serve our customers.

This year, Boeing recognized 486 suppliers that achieved either a Gold or Silver level Boeing Performance Excellence Award. LaminatedFILMS, a supplier to Boeing from its dedicated facility in Melbourne, FL, for more than 20 years, is among 358 suppliers to receive the Silver level of recognition. The company supplies bagging materials used to cover satellites and blankets for the Titan family of missiles and launch vehicles built by Boeing.

“We are very proud to have been recognized by Boeing for our work in developing and supplying materials used in the U.S. space flight program,” said Jim Landers, CEO of LaminatedFILMS. “Every day, all of our employees—in both our New Hampshire and Florida facilities—strive to accommodate the detailed quality, delivery and purchasing requirements mandated by both Boeing and the Kennedy Space Center.”

“Boeing has always been viewed as a valued partner,” added Kay Wood, Plant Manager of the Melbourne facility. “Although we’ve been working with the company for more than two decades, this year all of the criteria kicked in and we were presented with this prestigious award. It’s a great way to recognize LaminatedFILMS’ ongoing dedication to developing and supplying cutting-edge packaging solutions according to Boeing’s stringent criteria.”

Put Our Innovation to Work for Your Products!